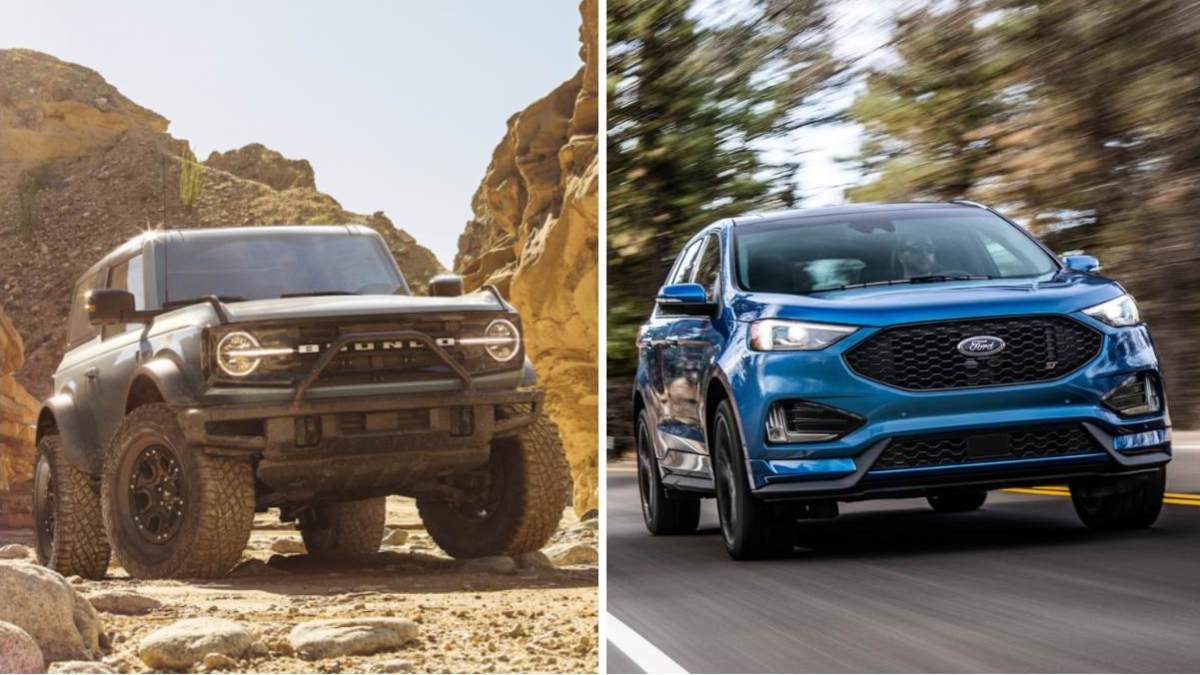 What is the difference between SUVs and crossovers? Our detailed crossover vs SUV comparison guide answers that question and many others to dispel any confusion you might have.

The terms ‘crossover’ and ‘SUV’ are often used interchangeably in today’s automotive landscape, and rightfully so. On the surface, crossovers and SUVs can look virtually the same.

But don’t be fooled by appearances! Look beyond their rugged good looks and you’ll realize that they are fundamentally different vehicles.

Not only does this SUV versus crossover comparison guide highlight the key differences between both types of SUVs, but it also compares them using seven pertinent buying metrics so that you know what to look for when shopping for one.

Difference Between SUV And Crossover

There is no universally-accepted definition of what exactly an SUV is, but there are several guidelines you can use to accurately determine the two main types, guidelines that mostly center on how the vehicle is constructed.

We will address the crossover vs SUV debate by providing a general overview of each type of SUV and what they have to offer prospective car buyers.

You can learn even more about SUVs in our detailed SUV buying guide.

All SUVs were once built using a body-on-frame architecture derived from a pickup truck, meaning their body and frame are manufactured separately before being bolted together later on in the assembly process.

While not as popular as it was just a few decades ago, this method of construction is still employed by car manufacturers, and the SUVs that use them are what auto journalists and experts commonly refer to as ‘traditional’ or ‘real’ SUVs.

This guide uses the term ‘SUV’ only to refer to traditional SUVs unless stated otherwise.

Truck-based, body-on-frame architectures are strong, durable, and fairly cheap to make but heavy and not very space-efficient. They are intended more for heavy-duty driving than for everyday use.

As such, SUVs are heavy and robust vehicles with serious performance credentials, particularly in the area of off-roading and towing. You can almost always expect them to have high ground clearance, powerful engines, and rugged and capable all-wheel or four-wheel drive systems, features that allow them to go places and do things that most other cars can’t.

Despite efforts of car manufacturers to make them behave less like trucks and more like cars, SUVs remain rugged workhorses at heart. They are best suited for people who regularly go off-roading and/or haul or tow heavy loads.

What Is A True Crossover?

We discuss the crossover body style in even more detail in our crossover buying guide, so have a look at it if you have any questions.

Crossovers are built on a unibody platform, meaning their body and frame are manufactured as one single piece. The term “unibody” is just fancy automotive lingo for a car’s platform, which is noteworthy for being lightweight and space-efficient.

Unibody platforms also score high on crash tests because they have distinct crumple zones built into their construction, and the force of impacts is more readily absorbed by the entire architecture rather than by a single section.

Basically, crossovers are mechanically similar to sedans and other passenger cars and not pickup trucks, so much so that most models share their platform with an existing sedan or hatchback. Their design places a strong emphasis on ride quality, handling, and fuel-efficiency.

What sets them apart is their bigger and taller bodies and higher ground clearance, which gives them the appearance and a lot of the capabilities of a traditional SUV, including better visibility and the ability to carry more people and cargo, tow heavier loads, and handle poor weather and road conditions more easily.

Crossovers can seat five or more passengers, and large, three-row models have practically replaced minivans as the vehicle of choice for large families. They are mostly powered by small, fuel-efficient four-cylinder engines and often offered with all-wheel drive.

Over 40 percent of every new car sold in North America, Europe, and many other parts of the world is a crossover, so it’s nearly impossible to miss seeing one in the wild.

In the U.S. and Canada, popular models include the Toyota Rav4, Honda CR-V, Ford Explorer, and Chevrolet Traverse, while the Renault Captur, Volkswagen Tiguan, and Nissan Qashqai are big sellers in Europe.

Think of a crossover as an SUV that drives, handles, and feels like a sedan. You get some of the off-road and towing capabilities of the former and a lot of the comfort, maneuverability,  and fuel-efficiency characteristics of the latter.

Now that you know the difference between an SUV and a crossover and have an understanding of their key benefits, which one is best for you?

To help you answer that question, we will compare the two types of SUVs using seven important car buying metrics and pick a winner for each one.

Unibody architectures are more space-efficient than body-on-frame platforms, which commonly have a rear-wheel drive and rear axle setup that eats into the passenger cabin and cargo area.

For this reason, you will find that crossovers usually have more rear passenger room and cargo space than comparably-sized SUVs, more so in three-row, 7-8 passenger models.

Those looking for a vehicle to haul around people will likely find a crossover to be more commodious.

With an SUV’s body-on-frame platform, the body of the vehicle is literally propped onto the platform, providing a high elevation for the passenger cabin. The fact that SUVs also tend to have very high ground clearance further enhances outward visibility.

Crossovers, by comparison, have a ride height that’s closer to a sedan, hatchback, or wagon. In fact, many small models sit no higher than your average hatchback.

Desire a commanding view of the road? An SUV is probably what you want.

SUVs are more often than not based on the body-on-frame chassis of an existing pickup truck and tend to ride and handle like a truck, as a result. Their heft and high ground clearance make them cumbersome to maneuver, and their ride can be stiff, jittery, and even jarring, especially over rough roads.

Crossovers, on the other hand, deliver a more pleasant ride as a result of being based on a car’s platform, one that’s usually shared with an existing sedan or hatchback. Their ride is smoother and more comfortable, while their smaller size and lighter weight makes them easier to handle and park.

If you’re looking for a capable work vehicle or an off-road toy, an SUV will likely have you covered. But for everyday driving, a crossover is the better option.

Although crossovers are very versatile vehicles with good towing and some off-roading capabilities, especially when compared to your standard sedan or hatchback, SUVs are even more capable.

Truck-based SUVs are simply better equipped to take abuse and handle heavy-duty applications such as driving in difficult conditions and towing and hauling heavy loads.

Whereas not every crossover is offered all-wheel drive, every SUV is available with the feature. And whereas most crossovers are powered by relatively small engines, many SUVs are offered with larger, more powerful pickup truck engines.

Needless to say, you will be better off going with a ‘real’ SUV if serious off-roading and towing are your thing.

Since crossovers are lighter than SUVs and don’t see a lot of heavy-duty work, they come equipped with engines and transmissions that are more optimized for efficiency. SUVs, on the other hand, often have bigger and thirster engines to accommodate their greater mass and capabilities.

Many crossovers such as the Toyota RAV4 and Honda CR-V are also available with extremely fuel-efficient hybrid systems, while models like Tesla Model Y and Ford Mustang-E are pure-electric vehicles.

You will be hard-pressed to find a fuel-efficient SUV, let alone one that runs on electricity.

The law of physics dictates that the larger and heavier a vehicle is, the better it fares in a collision with a smaller vehicle or object. Interestingly, even though SUVs are bigger and heavier than crossovers, they are not the safer option.

Unlike the SUV’s body-on-frame architecture, a crossover’s unibody design has built-in crumple zones that cushion the force of impacts, providing better protection for occupants.

Unibodies also provide a lower center of gravity, which reduces the risk of rollovers.

Crossovers are safer than SUVs both with regards to collisions and rollover accidents, with studies showing that you are less likely to die in one than in most other types of vehicles.

SUVs generally cost more because of their bigger engines and better off-roading and towing capabilities.

If, like most people, you don’t need the extra capabilities of an SUV, opting for a crossover will get you more for your money with change to spare.

Crossovers can be more expensive to repair after an accident since damage to one part of their unibody architecture is more often damage to the entire architecture. With SUVs, the fact that their body and frame are separate pieces means you don’t have to replace both if one gets damaged.

However, the higher potential repair costs of crossovers may be offset by their much lower purchase price and fuel-savings.

Moreover, as car-based utility vehicles that commonly share platforms with sedans and hatchbacks, they tend not to require special parts such as performance tires, which can be expensive to replace.

So, while SUVs are cheaper to repair, owning a crossover may be less expensive in the long-run if you’re a good, accident-free driver.

Didn’t get the chance to read through the entire guide? Don’t worry. The answers to these popular questions about SUVs and crossovers summarise many of the major points.

What Makes An SUV A Crossover?

The key difference between the two types of SUVs is that a crossover is built on a unibody (car) platform, while an SUV uses a body-on-frame (truck) chassis. It’s that simple.

Each setup has its advantages and disadvantages, which this guide discusses in detail.

Is A Crossover Better Than An SUV?

Crossovers are better than SUVs in many areas, but not in all. Because they are built on a car platform, they tend to be lighter, easier to drive and park, more comfortable, and more fuel-efficient, making them better everyday vehicles.

Truck-based SUVs generally have superior off-roading and towing capabilities, however.

Are Crossovers Safer Than SUVs?

Yes. Crossovers are safer vehicles than SUVs. Compared to the body-on-frame chassis of traditional SUVs, their unibody construction has crumple zones, disperses the force of impacts throughout the entire body of the vehicle to mitigate damage, and provides a lower center of gravity that reduces the risk of rollovers.

We hope that, after reading our SUV versus crossover comparison guide, you now have a better understanding of how the two types of SUVs are different and what they have to offer.

Deciding whether to get an SUV or crossover requires determining your priorities, needs, wants, and budget and weighing them against your options. It also requires doing test drives.

If you want a safer, more affordable, and comfortable vehicle with better handling and greater fuel economy, a crossover is the better option. If you need a vehicle that has superior off-roading and towing capabilities and is cheaper to repair, a traditional body-on-frame SUV might be more to your liking.

Share our crossover vs SUV comparison guide with anyone else you think might find it useful, and get more articles like it on our car buying page.