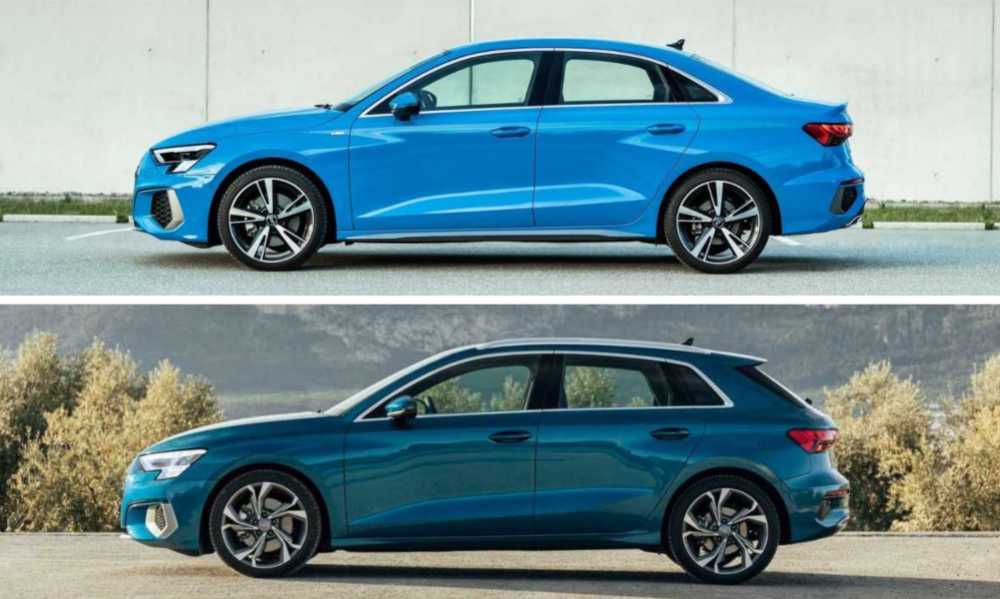 We address the hatchback vs sedan debate and provide reasons why you may want to get one body style over the other.

When you’re looking for a compact vehicle, you may find yourself comparing a sedan and a hatchback, more so if you live in a place where hatchbacks are popular (e.g. Europe). After all, of the 10 basic types of cars, few can transport up to five people as comfortably and cost-efficiently as they can.

But what exactly is a sedan and what is a hatchback? Not only does our hatchback vs sedan comparison guide answer this question, but it also highlights the pros and cons of each body style and compares them using the most important decision-making metrics to help you determine the best one for your needs.

Difference Between Hatchback And Sedan

There was once a time when sedans and hatchbacks were so distinct that telling them apart was easy; however, automakers have muddied the line between the two so much that more scrutiny is now needed.

How about we clear up any confusion you might have by explaining each body style’s key characteristics?

What Is A Sedan?

Our in-depth sedan buying guide covers sedans in great detail, so make sure to read it if this guide didn’t address a question you had.

In the strictest sense, a sedan is a four-door passenger vehicle with a three-box layout. There is an enclosed compartment for the engine bay, a second one for the passenger seating area, and a third for the cargo area (trunk/boot).

The compartments are separate from each other. In the case of the passenger compartment and trunk, the rear seatbacks and an immovable package tray under the rear window act as a barrier that makes it difficult, if not impossible, for a person to move between them.

However, many sedans come with rear folding rear seats that open a pass-through between the two compartments to accommodate items that are normally too large to fit in the trunk.

This classic, three-box design layout has been around for over 70 years, and popular sedans such as the Toyota Camry, Honda Accord, BMW 3 Series, and Mercedes-Benz C-Class have epitomized it for decades.

What Is A Hatchback?

If you want to learn even more about hatchbacks, check out our comprehensive hatchback buying guide.

Hatchbacks are passenger cars that boast a two-box layout. One compartment is dedicated to the engine bay, while a second, much larger one is shared by the passenger cabin and cargo bay.

There is no enclosed trunk. Instead, the cargo bay and passenger cabin are opened to each other, and people can freely move between them with some ease.

Hatchbacks also have an upright, squared-off rear section and a wide-opening, roof-hinged cargo door (hatch). Nearly all models come with rear seats that can be folded to completely link the passenger and cargo areas.

While most hatchbacks have four passenger doors, some are built with two or even three doors. The rear hatch is normally considered an extra door, which is why you will often see the terms five-door and three-door hatchback used to describe these vehicles.

The Volkswagen Golf, MINI Cooper, Mazda3, and Nissan Leaf are examples of hatchbacks in the most technical sense.

The Sedan And Hatchback Confusion

There is a new breed of passenger cars that look like sedans on the outside but are fundamentally hatchbacks.

Often called fastback sedans, these vehicles mimic the three-box proportions of a traditional sedan due to having a roof that slopes into something that unsuspecting onlookers often take for a small trunk. However, they have a hatchback’s two-box layout.

That’s to say the passenger cabin and cargo area are not separate, and the cargo area is accessed via a roof-hinged hatch that raises.

The Audi A5 Sportback and Tesla Model S are popular examples of vehicles that have this hybrid design. Just remember that while automakers often market them as sedans and sometimes even coupes, they are technically hatchbacks.

Hatchback vs Sedan: Pros And Cons

Having described what sedans and hatchbacks are in the previous section, we’re now going to go over their advantages and disadvantages.

Sedans come in many different sizes and styles and with different levels of performance, but taken as a whole, they tend to be affordable, comfortable, safe, and cheap to own vehicles.

They have two functional rows of seats, and most compact, midsize, and full-size sedans can seat five passengers in comfort. Their trunk usually offers sufficient space for the needs of most people.

Performance models notwithstanding, sedans are the most fuel-efficient class of vehicles and one of the cheapest to maintain, fix, and insure.

On the flip side, having a truncated roof instead of a tall, upright rear section, as well as a cargo area that’s separate from the passenger compartment, greatly limits their cargo-hauling capabilities.

Having a trunk can also make sedans a bit longer than similarly-sized vehicles that don’t have one, which can make navigating tight spaces more challenging.

Hatchbacks were once considered small, affordable, and boxy economy cars. While that description is less true today than it was in the past, it’s impossible to deny the high level of practicality they offer.

A two-box layout where the cargo area (trunk/boot) and passenger areas are a single volume; a wide-opening, roof-hinged cargo door; and fold-down rear seats give hatchbacks unprecedented cargo capacity.

They are also usually affordable, easy-to-drive, fuel-efficient, and cheap to repair, maintain, and insure, and their upright design results in a bigger rear window that may improve rear visibility.

A potential downside of hatchbacks is that the open nature of the cargo area can leave your valuables exposed to prying eyes if there is no cargo cover. Also, their boxy shape makes them heavier and less aerodynamic than more streamlined vehicles and, therefore, less fuel-efficient.

Knowing what sedans and hatchbacks are, their differences, and their advantages and disadvantages should clear up any confusion you might have about these vehicle types. In this section, we compare both body styles using eight decision criteria to help you determine the most suitable one for your needs.

Sedans and hatchbacks of the same size class typically offer similar interior volume. However, the longer wheelbase of sedans may result in slightly more legroom, especially for rear passengers.

If back seat space is of great importance, a sedan is probably the way to go.

The biggest advantage hatchbacks have over sedans is their immense cargo capacity.

The upright rear end, lack of a separator between the cargo and passenger areas, and wide cargo opening of hatchbacks mean you’ll be able to fit more and bigger items in them than in a sedan’s trunk.

For example, the hatchback version of the Toyota Corolla has 30 percent more cargo space than the sedan version. There is no question about which one to get if you need a cargo-hauler.

A sedan’s enclosed trunk allows valuables to be locked away out of sight of prying eyes, but with hatchbacks, an extra storage piece is often needed to conceal items you don’t want to be seen through the windows.

A hatchback’s cargo area is also easier to break into since the glass windows can be broken to gain access.

The shorter wheelbase and more compact proportions of hatchbacks can make them easier to drive and park in tight spaces than sedans.

Sedans are easy to drive, as well, at least more so than larger vehicle types such as SUVs, crossovers, and pickup trucks.

Hatchbacks typically have larger rear windows than sedans, which, depending on how many things you have loaded up in the cargo bay, results in better rear visibility.

Hatchbacks tend to weigh more than sedans, and their boxier shape makes them less aerodynamic. This can mean slightly better fuel-efficiency for sedans, but not always.

If you want to save money on gas or electricity, you might get better results with a sedan.

Hatchbacks and sedans are small, low-riding, and lightweight vehicles that provide similar levels of occupant safety.

While their relatively small size and mass places them at a disadvantage in collisions with larger vehicles, having a low center of gravity reduces their risk of rolling over when maneuvering at high speeds.

Both body styles are also normally offered with the same safety equipment. However, sedans may offer better passenger protection since their more spacious cabin may reduce the incidence of knee and head injuries for rear passengers during frontal collisions.

In places where sedans are more common than hatchbacks (U.S., Canada, etc.), there are far more sedan models to choose from than hatchback models. And when a model is offered in both a sedan and hatchback body style, the hatchback is usually the more expensive option.

The situation is reversed in regions where hatchbacks are popular. European, Indian, Australian, and Japanese car buyers, for instance, may find sedans to be the pricier body style.

This section answers the questions most commonly stirred up by the hatchback vs sedan debate.

Is A Hatchback Better Than A Sedan?

One body style isn’t necessarily better than the other. Hatchbacks and sedans each have their benefits and drawbacks, so the decision to choose one over the other will largely depend on your driving needs, habits, and preferences.

Hatchbacks offer a lot more cargo room and are a little easier to park, while sedans tend to have a little more passenger room and marginally better fuel economy. Find out how they compare to each other in this guide’s sedan vs hatchback comparison section.

Which Is Safer, Hatchback Or Sedan?

Hatchbacks and sedans are two of the safest vehicle types, thanks in large part to their low center of gravity. They also often offer the same safety equipment.

However, sedans may have a slight edge in safety since the more compact interiors of hatchbacks can result in more knee and head injuries for rear passengers during frontal collisions.

Why Are Hatchbacks More Expensive Than Sedans?

Hatchbacks are only more expensive than sedans in markets where they are not popular, particularly the U.S. and Canada. In Europe, India, Australia, and Japan, they are usually the cheaper body style.

The reason hatchbacks have a higher purchase price than sedans in North America is because manufacturers load them with more features out of the belief that people who truly want a hatchback are willing to pay more to obtain one.

People looking for a new or used car often find themselves comparing a sedan with a hatchback and wondering what the difference between the two are. Several things set these vehicle types apart, but the key difference is the cargo area.

Traditional sedans have a cargo area (trunk) that’s separated from the passenger cabin, while with hatchbacks, the cargo and passenger areas are joined and opened to each other.

But just because hatchbacks have better cargo-hauling capabilities than sedans doesn’t automatically make them the better body style. You’ll also need to consider several other factors to determine the most suitable vehicle type for your lifestyle needs.

If you found this hatchback vs sedan comparison guide informative, we have plenty more like it at our car-buying page.