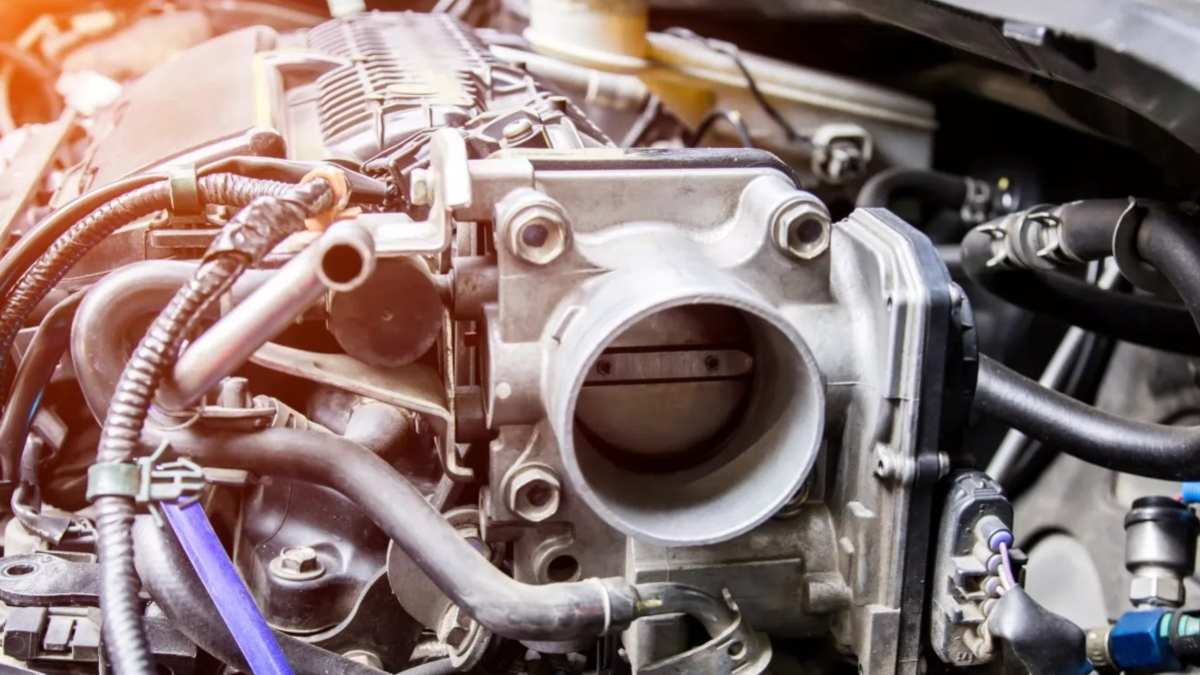 We go over five bad idle air control valve symptoms, as well as their underlying causes and potential fixes.

The idle air control valve is an important engine management component used by most road-going, gasoline vehicles. It controls idle speed to help keep the engine running when the vehicle isn’t moving.

A bad or malfunctioning idle air control valve can, therefore, cause a host of issues for your car or truck and potentially lead to costly repairs if left unaddressed.

In this article, we look at what happens when the idle air control valve goes bad, the reasons it goes bad, and what you can do to fix it.

What Is An Idle Air Control Valve?

Also called an idle control valve, auxiliary air valve, or IAC valve, the idle air control valve is an electrically controlled device designed to regulate and maintain the engine’s idling rotational speed at a constant rate so that your car or truck idles smoothly and doesn’t stall when it’s stopped.

Put another way, it controls the air needed to maintain a steady idle speed, acting essentially as a bypass of the throttle body plate. It continues to perform this function until the accelerator is pressed and the vehicle starts moving again.

You might be surprised to know that most vehicles made from 2010 and beyond don’t use an idle air control valve. They utilize something called an electronic throttle actuator instead, a device that serves the same purpose.

What Does An Idle Air Control Valve Do

Let’s look at how an idle air control valve works and the role it fills in more detail.

The more throttle there is, the more air your engine gets, and the more speed it produces.

Conversely, releasing the accelerator pedal closes the throttle body and cuts the airflow into the engine. And when there is no airflow, there is no engine speed.

If the idle air control valve didn’t exist, the engine would stall. This device bypasses the closed throttle plates, helping ensure the engine always has sufficient airflow to continue operating when idling.

IAC valves regulate the airflow by opening or closing by varying degrees depending on engine load. The more load placed on the engine (e.g. during parking maneuvers), the more the valve opens; the less load there is, the smaller the opening.

The idle air control valve is typically located on the engine’s throttle body, either as part of it or a separate but attached component. There, it works with the vehicle’s engine control unit (ECU) to ensure smooth engine idling by electrically regulating airflow.

The idle control valve is a strong and durable device that typically lasts as long as the vehicle does; however, several factors can cause it to malfunction or fail prematurely, causing a host of issues for your vehicle, possibly even rendering it undrivable.

Clogging due to carbon deposits and other contaminants is the most common cause of IAC valve failure. Due to the flow of air in and out of the valve, particles and contaminants may enter the valve chamber, clogging, jamming, or even damaging key internal components.

Although less common, electrical problems can also cause the IAC valve to become less effective or fail entirely. If these problems sometimes set off diagnostic trouble codes in the engine control module, identifying them is easy.

This special valve connects to the engine’s primary air intake valve and is responsible for making the necessary adjustments to the airflow. If it fails, the IAC won’t receive the electrical signal it needs to function.

Finally, normal wear and teal can have a toll on the valve seals. If the seals are excessively worn down, the valve will have trouble performing its job.

The idle air control valve usually produces several symptoms when there is a problem with it, alerting the driver to take corrective measures. These symptoms are quite general, however, as they can be caused by a variety of factors other than a faulty IAC valve.

If you inspect, clean, or replace your valve and the problem persists, chances are something else with your car or truck is causing it.

That being said, let’s look at what happens when the idle air control valve goes bad.

A faulty idle air control valve that’s stuck closed will fail to create enough idle speed, causing your engine’s RPMs to drop so much that it may feel as if it’s about to stall.

On the other hand, if the IAC valve is stuck open, the idle speed it creates will be too high, resulting in the engine running fast even though the car is not moving.

You may even experience the bad IAC valve causing a surging condition at idle whereby the RPMs shoot up and then drop back to normal levels.

Either way, the engine will idle roughly, causing your car to shake.

Of course, this particular warning light can be triggered by a host of other issues with the vehicle, but you can narrow down your options by using a scanner tool to check the engine control module for trouble codes.

This is one of the more serious symptoms. An idle control valve that fails completely may deprive your engine of the airflow it needs to operate smoothly when idling, causing it to stall.

In extreme cases, the engine may stall right after it’s started and not idle at all.

Sometimes, the engine will idle normally or stall without any extraneous stress, while other times, the rough idling or stalling occurs when engine load is increased.

For example, turning on your air conditioner or heater when your car has a bad idle air control valve, your engine will probably stall.

Reducing engine load by turning off the device(s) causing the extra load and letting the engine cool for a few minutes will provide a temporary fix; however, the best course of action is to fix the problem with the IAC valve.

Can you drive with a bad idle air control valve? While you may be able to continue driving your vehicle if it has a failing IAC valve, you shouldn’t do so.

Not only can a bad IAC lead to stalling while you drive, therefore obstructing traffic or, worse, causing an accident, but it can also place undue stress on your engine, damaging it.

An otherwise minor problem can quickly snowball into an extremely costly one if left unaddressed.

Since it compromises your vehicle’s operation, a bad IAC valve will likely make you fail a vehicle safety inspection. No joke — you will get an automatic fail once the inspector sees the Check Engine Light on.

Rather than wait for something bad to happen, have the faulty IAC inspected and, if necessary, cleaned or replaced.

How To Repair A Bad Idle Air Control Valve

Unlike repainting your car or truck, fixing a bad idle air control valve is a very easy and inexpensive process. In most cases, the problem can be fixed simply by cleaning the valve.

Replacing the IAC valve is only necessary if it’s damaged.

Cleaning an IAC valve is a very straightforward process, and anyone can do it with just a few basic tools and a little automotive knowledge. The steps are as follows:

Step 1. Turn off the engine and wait for it to cool.

Step 2. Pop open the hood and find the idle air control valve. Its precise position may vary depending on your vehicle, but it’s usually on top of the throttle body or somewhere near it. Your owner’s manual should have the exact location.

Step 3. Detach all the wires connected to the valve, and then use a wrench or ratchet to remove the fasteners (screws, bolts, etc.) holding it to the throttle body.

Step 4. With the valve removed, hold it pointing downward, and spray the pointed end with carburetor cleaner until all the carbon deposit and other debris are removed. Make sure that the carburetor cleaner doesn’t drip into the housing.

Note: Even if there is no problem, the idle air-control valve must be cleaned periodically to prevent dirt and carbon buildup from caking up.

Replacing a bad idle air control valve is as easy as cleaning a dirty one, if not easier, though you will need to buy a new valve.

The cost of an IAC valve will be around $70 to over $400 depending on the quality of the value and the make and model of your vehicle. If you decide to have a mechanic perform the replacement, expect to pay an additional $50 to $100 for labor.

So, the total replacement cost for an idle control valve at a shop can vary from $120 to $500 at a shop.

The procedure to remove and replace the old IAC valve is nearly identical to the procedure for cleaning a dirty valve (see above).

The only difference is that, rather than clean and reinstall the old valve after removing it, you would dispose of it and install a new one instead.

You will also need to remove the old gasket, clean any gunk that’s left behind, and replace it with a new gasket.

We knew you would have more questions about bad idle air control valves, so we prepared even more answers.

What Happens When The Idle Air Control Valve Goes Bad?

Complete failure of the IAC valve may leave the vehicle’s engine without enough air to idle properly. This can result in irregular or no idling, engine stalling, and the check engine light coming on.

Your car or truck might even not start in extreme cases.

Can A Bad Idle Air Control Valve Cause Hard Starting?

Yes, a faulty air control valve can cause hard starting.

Whenever you start your engine and the car idles, the throttle is closed, leaving the IAC valve to meter the proper amount of air to allow into the engine and maintain combustion. If it lets in too little or too much air, hard starting and rough idle often ensues.

Can You Test An Idle Air Control Valve?

Yes, it’s possible to test an IAC valve to see if it’s faulty. However, you will need a professional-grade vehicle scan tool to connect to the vehicle’s computer and command the valve to operate to check for effectiveness.

If necessary, you can also use a multimeter to check if the IAC valve is receiving enough power to operate.

Consider hiring a professional technician to perform these tests if you lack the appropriate tools or technical know-how.

How To Clean Idle Air Control Valve Without Removing It?

While it might be possible to clean an IAC valve without removing it, the removal process is so easy in most cases that you should remove the entire unit for a more thorough cleaning.

Few things are as unsettling as having your engine idle roughly, stall, or, worse, not start at all when you have places to go and things to do. Indeed, the consequences of a bad idle air control valve can be a pain in the you-know-what.

In this article, we went over what an IAC valve is, why it’s important, and what causes it to go bad. Even more, we provided you with the various symptoms of a bad IAC valve so that you can nip the underlying problem in the bud before it becomes a more serious and costly problem.

Fixing a faulty idle air control valve is a lot cheaper than many other car repairs, especially if you perform the job yourself. Oftentimes, all you need to do is clean the valve, though it will need to be replaced if it’s damaged.

Clearly, there is no reason why you should drive with a bad idle air control valve.

If you found our breakdown of the various idle air control valve symptoms informative, you might also be interested in some of our articles. Do you know how much it costs to replace wheel bearings and tie rods? How about why your turn signals only work sometimes?