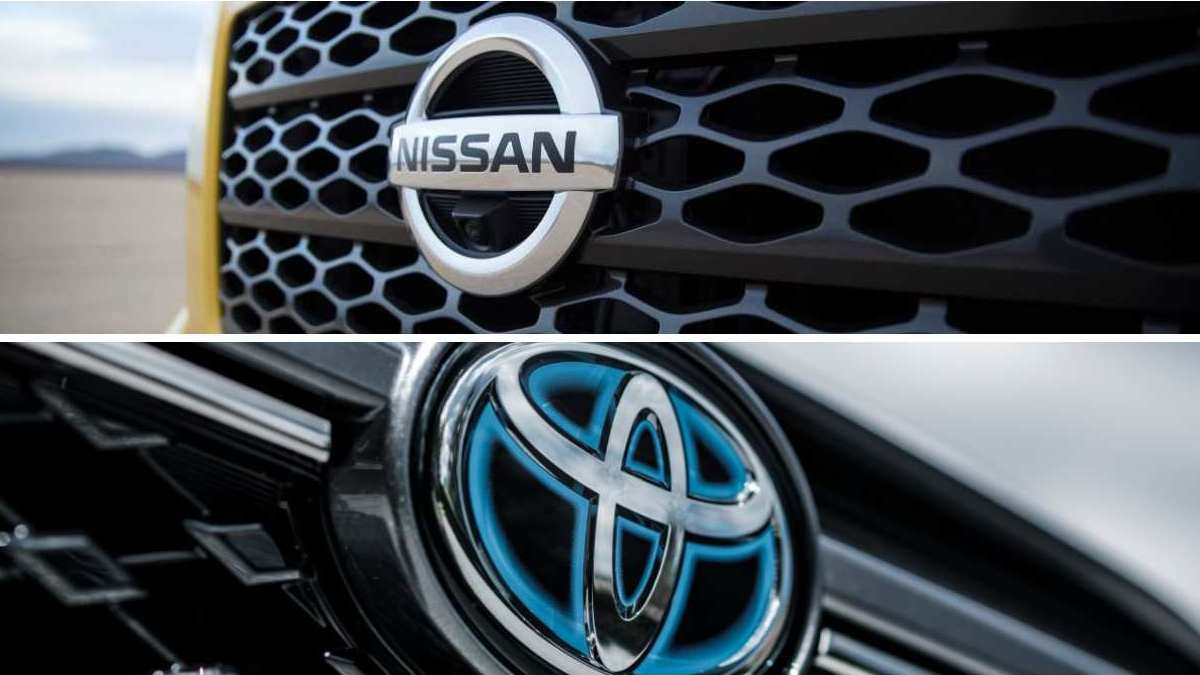 If you’re looking to buy a car but not sure whether to get a Toyota or Nissan, our Nissan vs Toyota comparison guide will help you make the right decision.

The battle between Nissan and Toyota has been raging since the 1960s and 70s, when the two Japanese automakers began making a name for themselves on the global stage, particularly in North America, Europe, and Australia.

Even though they both have a reputation for making good cars, the debate as to which company makes the better cars will probably never end.

So, is Toyota better than Nissan, or is Nissan the superior? If you’re itching for an answer, our Nissan vs Toyota comparison guide pits the two automakers against each to settle the argument once and for all.

Both Nissan and Toyota are popular, large-scale mainstream car brands that operate in nearly every vehicle segment. Below is a brief background of each company.

Toyota is the most successful automaker in the world. Founded in 1937 by Kiichiro Toyoda, the company has been responsible for many innovations and some of the most iconic cars in the automotive industry.

Cars like the Corolla and Camry sedans, Land Cruiser SUV, and Hilux pickup truck are loved across the world for their unprecedented reliability and build quality.

Toyota beat General Motors in 2008 to claim the title as the world’s largest car manufacturer for the first time, not least because of its solid reputation for reliable, fuel-efficient, and practical vehicles. In 2012, it became the first automaker to produce more than 10 million cars per year.

Outside of conventional ICE vehicles, the company is the king of hybrid vehicles, so much so that the Toyota Prius is almost synonymous with the term ‘hybrid’. It is also a pioneer and market leader in hydrogen fuel-cell vehicles.

Today, cash-rich Toyota employs more than 350,000 employees worldwide and consistently produces over 10 million vehicles every year. You can learn more about the company and the quality of its vehicles in our detailed Toyota brand analysis.

Nissan often vies with Honda for the title of Japan’s second-largest carmaker. Although much smaller than Toyota, the company’s growth closely mirrors that of its larger competitor.

Nissan’s success was built on the brand’s reputation for making reliable, practical, and fuel-efficient vehicles, not unlike Toyota or every other Japanese carmaker for that matter. It grew rapidly in the 1960s, 70s, and 80s to become one of the world’s top 10 largest automakers by the turn of the century.

Cars such as the Altima, Sentra, and Rogue (Qashqai) are very popular with families, while the Z cars and the iconic GT-R have found sizable followings with driving enthusiasts. Our Nissan brand analysis provides more details about the quality of the company’s vehicles.

Nissan was an early mover in the electric car space and, with the LEAF EV leading the ‘charge”, was the all-time largest electric vehicle manufacturer in the world until 2021, when Tesla surpassed it.

Not only is the company a leader in electrification, but it has also invested heavily in autonomous driving tech.

Introductions out of the way, we’re now going to compare Toyota and Nissan on the basis of model selection, safety, reliability, technology, affordability, and cost of ownership to see which company makes the better cars.

Toyota and Nissan are two of the largest mainstream carmakers in the world, offering nearly every type of vehicle, from small hatchbacks to large pickup trucks and electrified vehicles to high-octane sports cars.

They are well-represented in the sedan and lucrative crossover segments, where their models compete in every size class.

Nissan and Toyota also compete in the pickup truck segment — each offers a midsize and full-size model — and are two of only a few automakers to sell traditional, truck-based SUVs.

Toyota is big on hybrid electric vehicles and has the largest lineup of hybrids in the world. Aside from the Prius family, there is a hybrid variant of its most popular gas-powered models.

While practically non-existent in the hybrid car segment, Nissan is a major player in the battery-electric car segment with the LEAF, a segment its larger competitor has been reluctant to embrace.

However, Toyota is the only one of the two to offer a hydrogen fuel-cell vehicle, the Mirai.

Here is a roundup of all the models currently offered by each automaker in North America and, to a lesser extent, Europe.

While both automakers offer a comprehensive lineup of vehicles, it’s Toyota that has the numerical advantage. The company offers a lot more models to choose from, especially in the hybrid vehicle segment.

Toyota and Nissan make some of the safest vehicles on the road, ones that have excellent structural integrity and are offered with a host of modern collision-avoidance systems.

Every Toyota and Nissan model has earned either a Top Safety Pick or Top Safety Pick+ award from the Insurance Institute for Highway Safety, the highest ratings, as well as applaudable scores from the National Highway Traffic Safety Administration and Euro NCAP.

The Nissan Safety Shield 360 and Toyota Safety Sense suite of collision-avoidance systems, which include forward collision warning, automatic braking, blind-spot detection, adaptive headlights, and other invaluable safety features, help ensure you don’t get into accidents in the first place.

No matter which carmaker you go with, you are sure to get an incredibly safe vehicle. Both Nissans and Toyotas perform very well in collisions, and most models are available with the latest collision-avoidance systems.

Toyota has enjoyed a reputation as the most reliable car manufacturer for years, and for good reason. It has performed consistently well on reliability assessments, and its cars have been shown to last longer and retain their value better than comparable vehicles from other automakers.

Partly on the virtue of being a Japanese automaker, Nissan is also generally seen as a reliable brand. However, it has never performed at the level of Toyota.

Similarly, in a study by iSeeCars that analyzed nearly 12 million used vehicle transactions in 2020 to determine which models had the highest percentage reaching 200,000 miles (321,869 km), Toyotas accounted for five out of the top 10 vehicles, with Nissan taking no spots.

There is some truth to the tales of Corollas, Camrys, and Land Cruisers having bulletproof reliability. The Prius has proven to be exceptionally dependable, as well.

There is no way around the fact that Toyota makes more reliable cars than Nissan. Whether you’re talking about reliability assessments or real-world results, Toyotas have consistently proven to be more reliable than Nissans.

Performance is a less clear-cut metric to evaluate than model choice, safety, and reliability since automakers often have different benchmarks for aspects such as ride and handling.

What you can be sure of is that most Toyota and Nissan vehicles, particularly the passenger cars and crossovers, will be easy and comfortable to drive.

Toyota is the clear winner when it comes to fuel economy, however. Its models often lead their respective segments in fuel efficiency, not to mention hybrids make up a sizable percentage of its lineup.

As for pure driving thrills, Nissan may have the edge. Toyota has the impressive GR 86 and Supra sports cars to its name; however, the Nissan GT-R is a far more capable and exhilarating performance machine than either Toyotas, and the Z car isn’t too shabby either.

There are aspects of performance where either carmaker would be the better choice. For instance, Toyota has a clear advantage when it comes to fuel economy, while Nissan has a better track record for delivering exhilarating performance.

Nissan and Toyota are direct competitors that offer complete model lineups; however, Nissan has more models at a lower starting MSRP.

The Nissan Versa, for instance, has a starting price that’s nearly $1,000 less than the Toyota Yaris, while the Altima is about $500 less than the Camry. A base Nissan Rogue compact crossover is priced $500 lower than its RAV4 competitor, and you’ll save around $3,000 choosing a Pathfinder over a Highlander.

Not only does Nissan have a lower average starting MSRP for its entire lineup, but its vehicles are also generally offered with higher discounts. If you’re wondering why, it’s because there is a larger demand for Toyotas due to their stronger reputation for reliability.

Nissan tries to make up for its lower reliability by offering more car for less.

Finally, because Toyota’s vehicles hold their value a lot better than Nissans, you can expect them to be noticeably more expensive than Nissan’s cars on the used car market. Try shopping for a used Tacoma and Frontier, and you’ll see what I mean.

Whether new or used, a Nissan will more often than not be more affordable than an otherwise comparable Toyota. Toyota’s reputation for reliability comes at a premium.

A vehicle’s cost of ownership is affected by factors such as depreciation, reliability, and maintenance cost. While Nissan’s cars have a lower average MSRP, it’s Toyotas that are cheaper to own.

They are more reliable, have lower depreciation, and deliver better gas mileage.

RepairPal’s 2021 analysis found the average annual maintenance and repair cost for all Toyota stood to be $441 per year, while Nissan models averaged $500.

Toyotas also have higher resale values than Nissans, much higher in the case of some models. The Toyota Tacoma, for instance, commands a significantly higher price on the used car market than a Frontier with more standard features.

What this means is that, while Nissans have a lower average MSRP than Toyotas, Toyota owners typically save more money over time than Nissan owners and earn more money should they decide to sell their car.

The reliability and value retention of Toyota’s cars are legendary, so you will spend less owning a Toyota than a comparable Nissan and make more selling one.

Before we wrap up this comparison, we’ll answer some of the most common questions people have regarding Toyota and Nissan.

Is Nissan Better Than Toyota?

Nissan makes safe, fairly dependable, and tech-forward cars; however, on top of being all of that, Toyotas are typically more reliable, fuel-efficient, and cheaper to own.

Toyota also offers a broader lineup of vehicles than Nissan and is the king of hybrids.

Does Toyota Have Better Resale Value Than Nissan?

When you compare Toyota and Nissan on the basis of model choice, safety, reliability, performance, affordability, and cost of ownership, you’ll find that both Japanese carmakers make good cars. However, it’s very clear that one has a leg up on the other.

Although the average Nissan is less expensive to buy than a comparable Toyota, Toyotas are more reliable, fuel-efficient, and cheaper to own and, as a result, have higher resale values.

Toyota also offers a wider selection of models and vehicle types to choose from and is by far the clear winner when it comes to hybrid vehicles.

Nissan may have an edge when it comes to sports cars, and some of its models are certainly better than their Toyota competition; however, Japan’s number one automaker is simply better in every other way.

Did you enjoy our Nissan vs Toyota comparison guide? Get more articles like it on our car buying page.

What To Do After Buying A Used Car

what to ask when buying a used car

Who Makes Infiniti? Where Are Infiniti Cars Made?

Find out who makes Infiniti and where its vehicles are made. Most people who have heard of Infiniti know that it’s a car brand;... 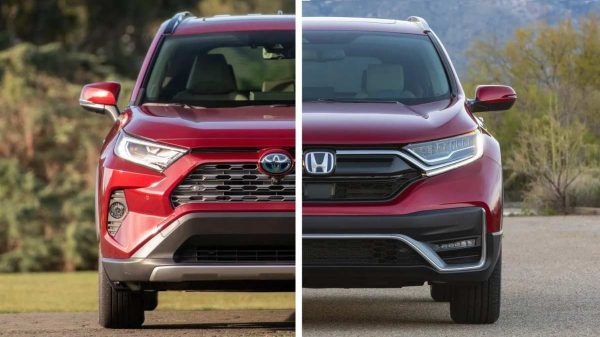 We take a deep dive into the Honda vs Toyota reliability debate and pick a winner. Toyota and Honda are two of the most... 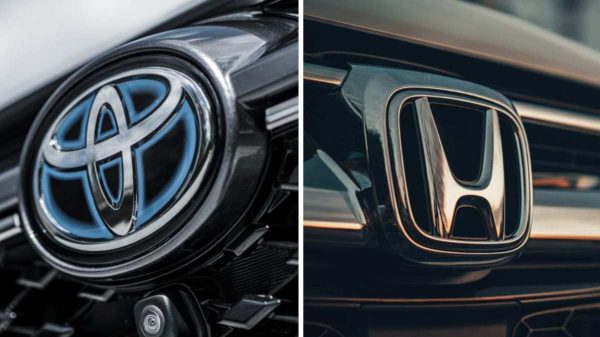 Want to know which Japanese automaker makes better cars? Our Toyota vs Honda comparison guide lays down the facts. In the automotive world, few... 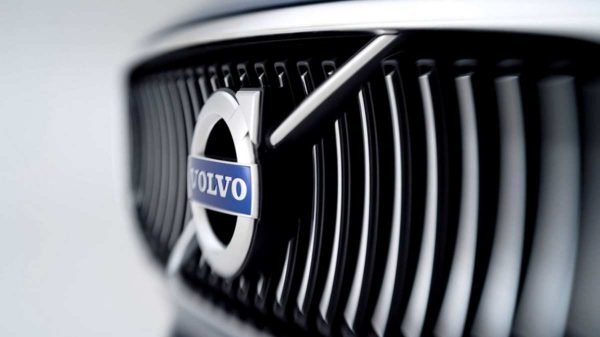 Are Volvos good cars, and should you buy one? Get the full scoop. Long known for building safe but slightly dull sedans and station...